Contact a DIT Export Adviser at: https://www.great.gov.uk/contact/triage/location/ for a free consultation if you are interested in exporting to Nigeria.

Nigeria’s geography is rich in variety, especially between the north and the south of the country. The main geographical differences can be seen throughout the landscape and vegetation. In regards to Nigeria’s climate, this varies between being arid and having a humid equatorial climate. Due to both the climatic and societal differences within Nigeria, three distinct geographic regions can be identified; these are the north (Nigerian Sudan), the central region and the south (coastland on the Gulf of Guinea).

Nigeria, or the Federal Republic of Nigeria, is located to the north of the equator in central-west Africa. The warm, tropical country’s coastline sits on the Gulf of Guinea in the eastern Atlantic Ocean. Nigeria borders Cameroon and Chad to the east, Benin to the west and Niger to the north.

The population of over 200 million live within the 36 states, which are then grouped into six main geopolitical zones. These zones include: North Central, Northeast, Northwest, Southeast, South and Southwest.

Abuja, or the Federal Capital Territory, is the nation’s capital city, located at the centre of the country.

Nigeria experiences two main seasons: the ‘rainy season’ and the ‘dry season’. In southern Nigeria — the most fertile part of the country — it is especially humid as there is a heavy rainfall. The north is much hotter and drier with savannah and grasslands covering much of the land.

Two of Africa’s major rivers are in Nigeria – the Niger, which is the third-longest river in Africa, and the River Benue. Both rivers flow from the west to the east and converge at Lokoja, flowing south through the Niger Delta and into the Gulf of Guinea.

A diverse range of ethnic groups can be found in south Nigeria, including the Yoruba, the Igbo-Ibibio and the Edo. The areas where these cultural groups tend to settle are very densely populated, attractive due to the widespread cultivation of cacao. The areas where soil is less fertile, such as the Cross River, are extremely sparsely populated. The south produces many of Nigeria’s key resources, predominantly from agriculture, as well as other natural resources, thus contributing significantly to the country’s economy. More industrial resources are also produced throughout the south of the country, which is home to the majority of industrial hubs and crude oil production.

Nigeria’s ‘middle belt’ region is predominantly made up of infertile soil and the climate is less hospitatible for agriculture. For this reason, it is less developed than its northern and southern counterparts and is also more sparsely populated. More than a quarter of Nigeria’s land makes up the central region, whereas it is inhabited by less than 20% of the population of Nigeria. There are, however, some areas of greater population density, such as Jos Plateau.

Economic changes began to develop during the early 20th Century, as Nigerian Sudan in the north became connected to the country’s coastal ports through railroads. The region previously traded across the Sahara to other countries within North Africa, the Mediterranean and the Middle East. This development increased significantly after 1975 when a full administrative reorganisation occurred as the central region, home to seven of the then 19 states, became increasingly important.

The north is home to several cultures, including the Fulani and Hausa cultures that are predominant in the region. The former are nomadic cattle herders and the latter are cultivators. Other cultures include the Kanuri people in the state of Borno.

The Sokoto and Kano-Katsina regions are the most densely populated regions in the extreme north of Nigeria, although the Katsina area has relatively low soil quality and therefore struggles to sustain its large population. 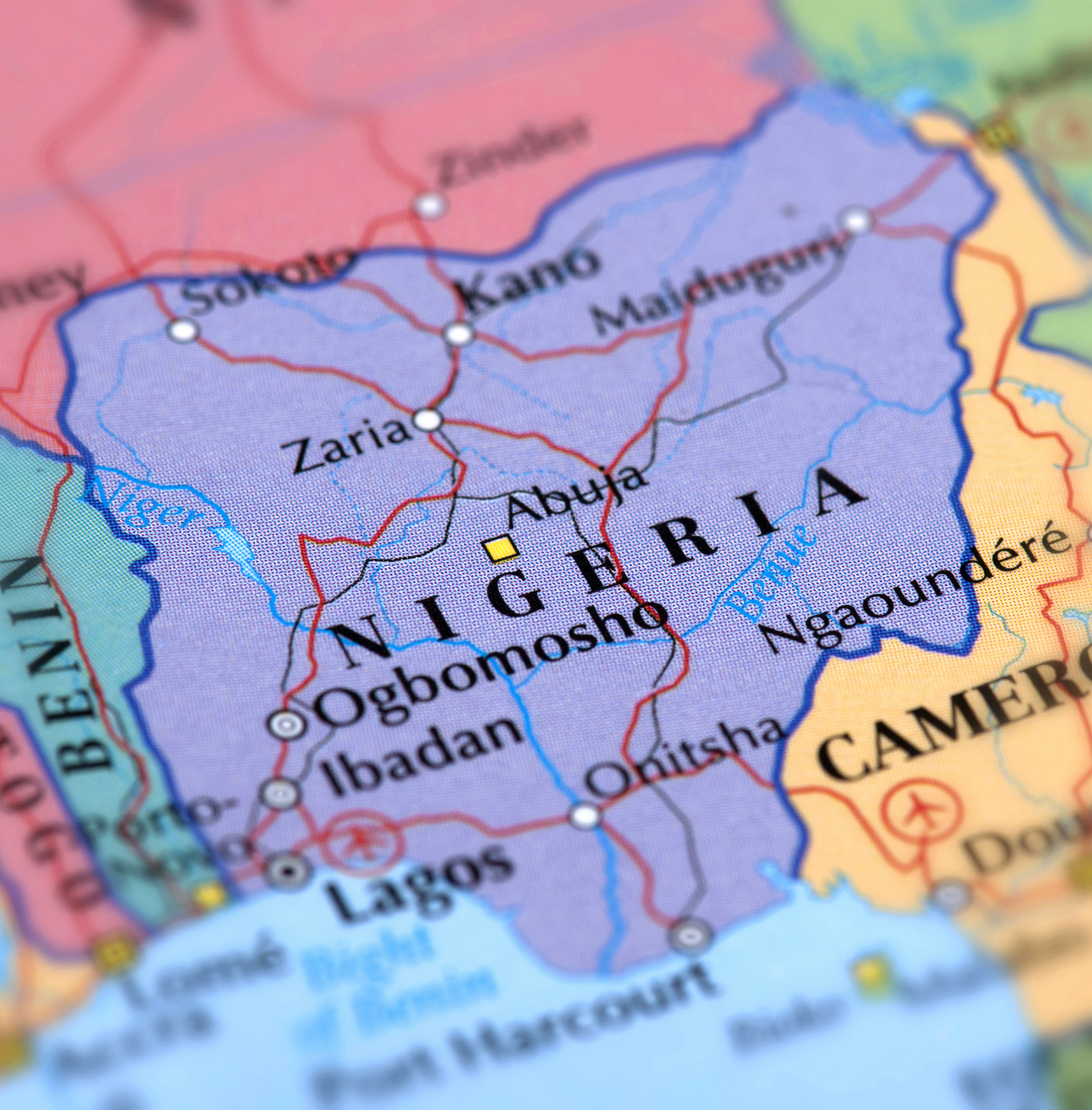 Nigeria operates an American-style Executive Presidential system of government. This was first introduced in 1979 and was reintroduced amidst the return to civilian rule in 1999. The February 1999 general elections represented the return to a multiparty democracy after 15 years of military rule.

Nigeria’s current president, Muhammadu Buhari, took office in May 2015, in an election that marked the first time an incumbent president in Nigeria had been defeated. The reaction to the result of the election was immediate, peaceful acceptance, which was important for both Nigerian and wider African democracy. Tackling corruption, strengthening the economy, and improving the country’s security represent some of the main priorities of the current Nigerian Government. These goals are long term and present a number of challenges; however, some progress has already been made.

Nigeria’s democratic framework guarantees human rights within its constitution. There is a strong civil society and independent judiciary.

Within Nigeria, there are inconsistent child labour laws, with varying minimum ages. Article 59 of the Labour Act of 1974 is in force in all 36 Nigerian states, and determines that 12 is the minimum legal age of employment, although it does allow children of any age to undertake light work alongside family members in agriculture, horticulture and domestic services.

In 2003, the Child Rights Act (CRA) was adopted in Nigeria. This Act meant that principles of the UN Convention on the Rights of the Child were incorporated into Nigerian Law. This provides a framework to ensure violence, abuse and exploitation of children is prevented or dealt with appropriately. This law is not yet universal and for it to become law in a territory, it must be ratified by each individual state within it.

Children who are 17 and under are not allowed to work under the CRA rules, except for some light work for family members. Article 59 of the Labour Act only applies these restrictions to children under 12. As a result, it is difficult to know what minimum ages apply to different types of work across the country. As a result, children are at risk of being made to work in dangerous settings, such as in industrial undertakings, underground, with machines, and in domestic service.

Nigeria is one of the top three countries of origin for modern slavery victims in the UK. President Buhari is attempting to prevent vulnerable individuals from becoming victims of human trafficking by embarking on a crackdown on human trafficking that is supported by the UK. In 2015, Nigeria adopted the Trafficking in Persons (Prohibition), Enforcement and Administration Act.

Nigeria’s Same-Sex Marriage Bill was passed in 2013 by a House of Representatives vote. This bill prohibits gay marriage as well as same-sex public displays of affection. Same-sex relationships are punishable by up to 14 years in prison. Those who associate with LGBT community members, or help same-sex couples get married or pursue their lifestyle can also be punished. Any association with gay identity, such as privately gathering with gay people or the promotion of LGBT rights are also criminalised.

Nigeria’s constitution protects workers’ rights to form or belong to trade unions and guarantees the rights of free assembly and association. There are, however, a number of statutory laws that restrict workers rights to associate or disassociate with labour organisations.

Nigeria is the most populous country in Africa, home to over 200 million people. By 2050, that figure is expected to reach over 400 million. In Nigeria, 2 million people enter the job market each year and the population is young, with 62% aged 24 or under.

Extreme inequality, poor infrastructure, a fragile business environment, high corruption, a fast-growing population and significant economic disparities between the north and the south of the country are key characteristics of the Nigerian economy. The bulk of Nigeria’s Government and most of its foreign exchange earnings comes from oil.

In 2016, Nigeria experienced a full year of recession; its first in 25 years. Oil production in the country was hampered by militant attacks in the Niger Delta, as well as vandalism, and oil prices reached a 13-year low. Real GDP decreased by 1.5%. In 2017, the country began to recover weakly, with low but positive growth occurring for two quarters, and inflation moderating to 16%. The FCDO recorded an overall positive growth of 1.9% for the country in 2019. The infrastructure deficit for Nigeria is large; approximately 4,000 MW of electricity is produced per day (not all of which is transmitted) and the privatised energy sector is burdened by debts, theft and leakages. The country has a Power Sector Recovery Plan in order to address these investment barriers.

Nigeria’s debt position is concerning. The ‘Economic Recovery and Growth Plan’ was an initiative that ran from 2017 to 2020 which was designed to kick-start Nigerian economic growth and ensure macroeconomic stability by encouraging faster infrastructure development, enhancing agricultural production and food security and finalising power sector reform.

In 2020, Nigeria ranked 131st out of 190 countries in the World Bank’s Ease of Doing Business Index (the UK ranks 8th): https://www.doingbusiness.org/en/data/exploreeconomies/nigeria.

Contact a DIT Export Adviser at: https://www.great.gov.uk/contact/triage/location/ for a free consultation if you are interested in exporting to Nigeria.

The Nigerian economy grew by 1.9% in 2018, and 2.3% in 2019. This continued growth should lead to increased spending powers within the Nigerian population. UK exporters can benefit from this increase in disposable income.

The Nigerian Government had implemented an Economic Growth and Recovery Plan, outlining 60 different initiatives within sectors including agriculture, energy and social investment. The three-year plan aimed to tap into Nigeria’s growth potential and diversify the economy which is currently heavily reliant on imports and gas exportation. The plan, that ended in 2020, is also intended as a blueprint for future generations and programmes in order to achieve sustained economic development, economic security and lift a significant number of Nigerians out of poverty. This, in turn, will create opportunities within increased public-private partnerships as the government alone cannot guarantee such economic growth. In line with the objectives of the EGRP, the government is collaborating closely with businesses and corporations within individual sectors to drive growth.

In 2021, total exports of goods and services from the UK to Nigeria were recorded at over £2.4 billion.

The UK has left the EU, and the transition period after Brexit came to an end after 2020. Since 21st January 2021, the UK does not have a trade agreement with Nigeria, although this is to be addressed.

Nigeria is a member of the African Continental Free Trade Area (AfCTA), signing the agreement in 2019. This is a free trade agreement between 54 African Nations that aims to remove tariffs on 90% of goods.

Trade between UK and Nigeria

Industries exporting out of Nigeria

The top 10 industries exporting out of Nigeria in 2020, were:

Incentives for UK businesses exporting to Nigeria include:

These benefits make Nigeria a good place to test your product in a new market.

Strengths of the Nigerian market

Strengths of the Nigerian market include: